I was at home on my own last Sunday night, as I have been for the last 6 weeks during the COVID-19 lockdown and the night curfew, when I received a text message with a photo of a tent, followed soon afterwards with a night photo of a Ringtail Possum. The text said: “We saw a possum!” I was puzzled, but a few minutes later I received a video call from my grandchildren, aged 8 and 6, very excited about the 8 possums they had seen, shouting out about 2 Ringtails and 6 Brushtails and one Ringtail with a baby on its back. Much excitement and a lot of black video with the phone camera pointed up to the black sky with nothing visible.

“I can’t see anything!” I said, and the reply was, “I’m sorry. It’s too dark to video the possum.” And there followed much excited chatter telling me they were on school holidays and had gone camping in their back yard with Mum & Dad and their dog, Molly, who was not allowed in the tent so had gone back to her kennel. It was difficult erecting the tent, I was told, as the pegs would not go through the concrete path, so they had to be inventive. The wood fire was burning to keep them warm and dinner, now over, had been fish and salad. And this camping was not just for one night, I was told, but three nights camping in their new tent with a separate room for the kids!! Wow! I was infected with their enthusiasm and was feeling the excitement.

With the video I saw the tent and the fire and the faces of my two lovely grandchildren and their parents, and everyone was very happy and excited. I felt included and my loneliness dispersed as I felt connected with everyone out camping in the back yard, with me included, even though I was sitting in my living room in Healesville and they were on the Mornington Peninsular. Such a simple thing to do. Just a phone call. A video button. But with modern technology the barrier of distance was erased, and we could be together in a warm and loving way. I decided to call this ‘Camping with Grandad on the mobile!’  Such joy in such difficult and tragic times. 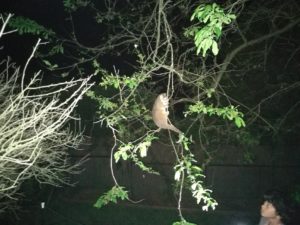 Your ticket for the: Camping with Grandad on the Mobile!!